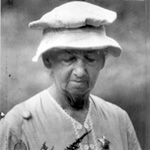 The Writings of Eloise Butler

Published in the Minneapolis Sunday Tribune May 21, 1911

[Note: To facilitate identification of plants, we have taken the liberty of adding the information that is within brackets and also all the botanical names have been put into italics. The language of Eloise's day is left as written. Additional notes at the bottom of the page.]

In some favored places about Lake Minnetonka may be seen during May profuse growths of the beautiful Large-flowered Trillium (T. grandiflorum). So highly is this plant esteemed by the English that they have imported large quantities of it from this country for plantations in their private parks. The petals, at first pearly white, turn pink in age, as does the seed vessel.

The trilliums are closely related to the lilies. All have a thick underground stem, bearing a single aerial stem, which supports a whorl of three large leaves varying somewhat in size and shape in different species. Above the leaf whorl arises the lovely flower, with or without a stalk; erect or drooping; white, red, purple or pink striped, according to the species. The flower is also on the plan of three green sepals, three colored petals, six stamens in two rows and one pistil made up of three united carpels. The name trillium probably comes from the three leaves. The plant has a number of local names - wake robin, bath flower and “way down East;” the pink-striped or painted trilliums are called “wild pinies” - meaning peonies.

A cute little species and one of the earliest to blossom is the Dwarf trillium [Snow trillium, Trillium nivale], much smaller as the name implies. The most common trillium about Minneapolis is T. cernuum [Nodding Trillium], lovely but less showy than the large flowered form.

Another ally of the lilies is the Large-flowered Bellwort (Uvularia grandiflora), bearing a slender, drooping yellow bell at the extremity of each fork of the leafy stem. In this species the leaves are perfoliate, that is, the stem seems to pass through the base of the leaf. In another pretty species of bellworts - a smaller plant with cream colored bells - the leaves are sessile [Wild Oats or Sessile-leaved Bellwort Uvularia sessilifolia]

The following four species people often bunch indiscriminately together as May flowers, or anemones. The False Rue Anemone (Isophyrum biter natum) [now Enemion biternatum], with branched leaves and a few white flowers, stars the woods about Minnehaha. The fibrous roots of this plant are thickened at intervals; the seed vessel has two or three seeds instead of one, as in the anemones. The Rue Anemone [Thalictrum thalictroides] of oak woods has a cluster of bright purplish pink flowers on stalks set like the sticks of an umbrella above a whorl of leaves. Another leaf, similar to that of the false rue anemone, arises directly from a cluster of three or four fleshy roots like miniature sweet potatoes.

A genuine anemone - the one-stalked grove anemone [Wood Anemone, Anemone quinquefolia] - bears above a whorl of branched leaves, a single flower, white and daintily flushed with pink when it first appears, but turning white as it matures. This plant has a slender, horizontal root stalk. The hepatica always may be recognized by the evergreen, three-lobed leaf, and teh three green leaves under the flower, closely imitating a calyx.

These are all members of the crowfoot family [now called Buttercup family]. In all the petals are absent but the sepals are brightly colored. It is a rule in botany to call the outer floral leaves sepals, however bright their color; and if but one set of leaves is present, to consider the petals are absent.

But the violets are pre-eminently the flowers of May, and is it not true that of all flowers they are the most beloved, not excepting the rose? At least nine sorts of violets can be readily distinguished by the novice in the vicinity of Minneapolis.

Violets may be classed under two heads - the leafless and the leaf-stemmed. The leafless species have only a subterranean stem, while the other class have also a stem above ground. To the first class belong the common blue meadow violet [Viola sororia with V. papilionacea now assigned here also].

One is rapturously happy when he chances upon a meadow tufted with clumps of these violets. No wonder at such a time one supposedly guiltless of “dropping into poetry” was heard crooning over and over to himself, “I would rather know where violets grow than a good many other things!”

The bird’s-foot violet of the prairies [Bird's-foot Violet, Viola pedata] has a finely divided leaf. The flower is pale lilac with a lighter eye like a small pansy. The Larkspur violet [Viola pedatifida], also a prairie form, has a flower similar to that of the meadow violet but a dissected leaf. The Arrow-leaved violet [Viola sagittata] growing on low land usually has leaves with an arrow-shaped base, but it may vary considerably in shape. The flower is a bright purple.

Often associated with this violet, on the sandy shores of ponds, is the white, Lance-leaved violet [Viola lanceolata], its leaves slender as grass blades - not at all like the typical, more or less rounded, violet leaf. Another favorite is the small, white violet of the bogs, much prized on account of its exquisite fragrance.

In the second class are the Common yellow violet [Downy Yellow Violet, Viola pubescens] of the rich woodlands, the small very pale dog violet of wet meadows [Viola labradorica - old V. conspersa] and the Canadian violet [Viola canadensis]. The last named has the same habit as the yellow, but the petals of the flower are white and blotched with purplish pink. Besides pleasing the eye, the flowers are fragrant, and, in open places, bloom throughout the season, like its aristocratic sisters the cultivated pansies.

Over twenty species of violets are found within the borders of the state, but the characters of some of these are based upon features that can be determined only by experts.

Violets are in the habit of producing besides the beautiful flower, so called secret, bud-like flowers, that are without color and never open. These secret flowers mature seeds through self-fertilization; while the showy flowers are dependent upon insects for pollination. The expert on violets must ascertain the number, form and color of the seeds made by the hidden or secret flowers.

The insect-pollinated flower is fitted to the insect, and the insect to the flower, as a key to its lock. In sucking the nectar from the hollow spur on the lower side of the violet flower, the insect - a bee, for instance - is obliged to take such a position as to become smeared with the pollen, which it transfers unconsciously to the sticky part of the pistil of the next violet that it visits. The insect is further directed by the nectar guides, where to insert its tongue, as they converge toward the nectary, or spur.

Therefore, when flowers are pollinated by insects, the color, fragrance, spots, streaks and irregularities in the shape of the flower, are all for the purpose of furthering the production of seeds. But from these attractive features, for utility only in the flower, arbitrarily assumed, we derive our purest pleasures.

More information and photos on some of these plants can be found under these links:
Large-flowered Trillium