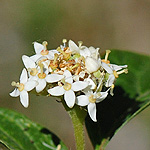 Red osier Dogwood is found primarily in the woodland and marsh areas; this widespread native shrub begins blooming as early as the beginning of May, but you may spot blooms at various times until Autumn. The plant grows to be an erect to spreading large shrub, up to 9 feet high and tends to form thickets with numerous stems rising from the root system.

Stems: The "red" refers to the color of the bark of branches, stems and twigs in fall, winter and spring; more greenish-red in summer. All stems have light colored lenticels. Twigs have narrow tapering buds but the terminal flower buds, which also produce leaves, will be more swollen. There are scar rings at the twig nodes. The pith of older twigs is whitish; whitish color lenticels sparingly dot the surface. The youngest twigs will have fine appressed hair. Twigs resting on the ground may root at a stem node. Some plants have a yellow variation to the stem color.

Leaves are opposite, entire, on slender stalks, oval to lance shape, rounded at the base and more pointed at the tip, whitish on the underside, and have 5 to 7 pairs of upward curving veins. The upper surface has finely appressed hair, the underside with sparse whitish hair on the veins. Some plants may have leaves without hair. Fall color ranges from yellow to a purplish red depending on the annual seasonal variations. Cultivars are available in the nursery trade with variegated leaves.

The inflorescence is a flat-topped branched cluster (a cyme), about 2 inches wide, at the end of stems.

Individual flowers are perfect, small, 1/4 inch wide, 4-parted. They have a short 4-toothed calyx, 4 spreading lance-shaped white petals, 4 stamens that arise alternate with the petals on long filaments with yellow anthers and a single yellow-green pistil with a single style that has a knob-like tip.

Fruit: Fertile flowers form a round drupe, 1/4 to 1/3 inch diameter, green initially, that turns to a whitish lead color, and usually contains one dark brown hard seed, which is round, 4 to 6 mm, but slightly flattened top and bottom and distinctly ribbed. (Some references state there are 2 seeds per drupe but one is typical in Minnesota plants) Shrubs are 3 to 4 years old before they produce seed. Seeds require 60 days of cold stratification for germination.

Habitat: Red osier Dogwood grows best in wet to mesic soil conditions with full to partial sun. Poorly drained soils are best which is why it is frequently found in marshes. Planting should be done as early as possible and always before June. It spreads vegetatively by crown sprouts and low stems rooting at the nodes. There are few pest or disease problems.

Names: The genus, Cornus, is from the Latin cormu which refers to a 'horn'. Most references believe that name was applied as a reference to the density of the wood of this genus, which also includes the boxwoods. As to the common name, Dogwood is very dense and was once used for loom shuttles and spindles and in old English "Dagwood" referring to woods used in making daggers, skewers, and arrows. The Spindle Tree (Euonymus atropurpureus) is another such species which was referred to by some as “dogwood”. (Ref. #7).

Cornus is also the old Latin name for the cornelian cherry, Cornus mas. The species, sericea, means 'silky', referring to the finely appressed hair on the young twigs and upper leaf surface. You will frequently see this plant listed as one of the older scientific names - Cornus stolonifera, which name referred to the underground stolons that allow the plant to spread and form thickets, but Flora of North America states that this is a mis-identification, probably from observation of the rooting stems, as this species does not have rhizomes and does not produce stolons. The author name for the plant classification - 'L.' refers to Carl Linnaeus (1707-1778), Swedish botanist and the developer of the binomial nomenclature of modern taxonomy.

Comparisons: There are four Dogwoods in Eloise Butler. All have similar looking flowers. An identification key is presented below these photos. 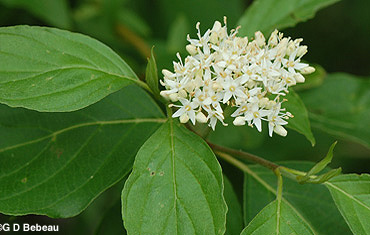 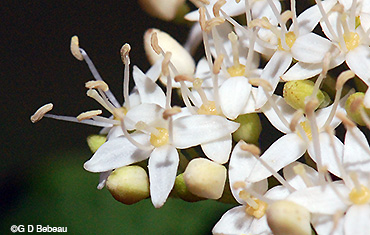 Above: Late May to early June blooms. Flower are in a flat-topped to slightly rounded cluster at the end of last years twigs.

Below: In winter, particularly late winter, the Red osier Dogwood provides a bright color in an otherwise brown and white landscape - most noticeable in the marshes. Fall leaf color can be yellow to a reddish purple depending on seasonal variations. 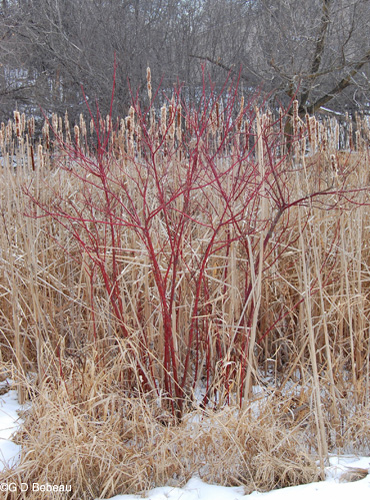 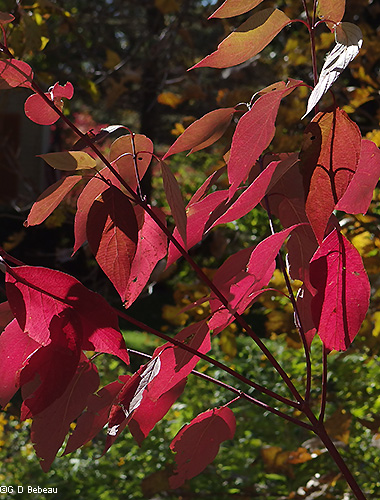 Below: The leaves, on slender stalks, are rounded at the base and more pointed at the tip, with 5 to 7 pairs of lateral upward curving veins. The upper surface has appressed hair and the underside (2nd photo) is paler in color with some fine hair on the veins. 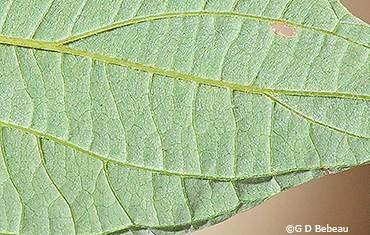 Below: 1st photo - Twigs are reddish with white lenticels and have narrow tapering lateral buds but the terminal flower buds will be more swollen. 2nd photo - Fall leaf color can be yellow to a reddish purple depending on seasonal variations. 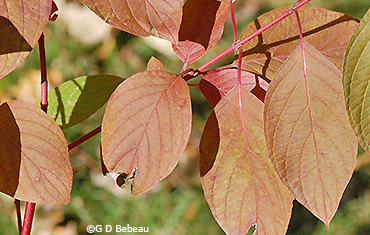 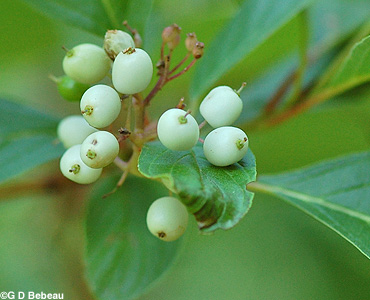 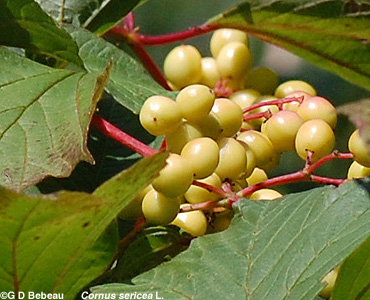 Below: 1st photo - The final coloration of the fruit occurs in September and October. 2nd photo - The seed - usually one or two per drupe.

Below: 1st & 2nd photo - Twig color of fall, winter and early spring, from which comes the common name. Note the ring at the twig node in the 2nd photo. 3rd photo - Twig with immature June fruit. 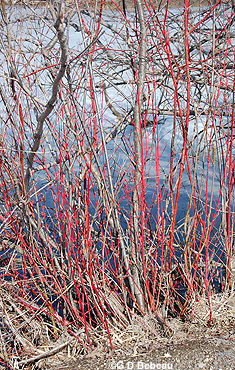 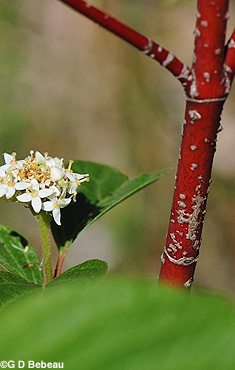 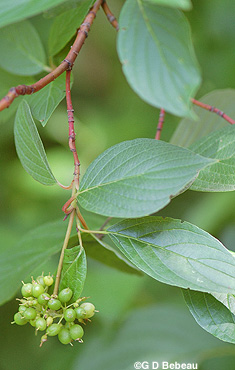 Below: A large grouping of Red osier Dogwood in the wetland area

Comparison of 4 Dogwoods at Eloise Butler

Notes: Red osier Dogwood is indigenous to the Garden area. Eloise Butler catalogued it on April 29, 1907 (listed as Cornus stolonifera). She planted the species on Oct. 28, 1914. In 1921 she noted planting a yellow-stemmed variety. This is a natural occurrence and not a separate species although Eloise states the Park Board Nursery was growing them. Redosier Dogwood is native to all of Minnesota except a few scattered counties in the south central part of the state. In North America it is found throughout except for the SE Quadrant of the U.S. Susan Wilkins added plants to the Garden in 2019.

There are 6 native dogwoods of the Cornus genus found in Minnesota. In addition to the 4 in the Garden, detailed in the table above, there are Bunchberry Dogwood, C. canadensis; and Round-leaf Dogwood, C. rugosa, both of which are historical but indigenous to the Garden.

Medicine and Lore: There are a number of references to native use of this plant. In her study of the Minnesota Chippewa, Densmore (Ref.#5) notes a decoction of the root was used as a wash and in a compress to treat eye diseases. The outer and inner bark was used in making red, black and yellow dyes. She gives a number of formulas for those. Tilford (Ref. 39) reports on the bark being very laxative and was used by the Blackfeet for digestive disorders. The inner root bark was smoked in a pipe.