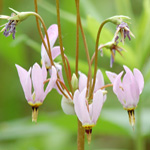 Shooting Star has a naked flowering stem, which is not tall, usually 8 to 18 inches high with a green to reddish color. The stem is called a scape - an above ground stem coming directly from the root. Only the stem remains upright in mid-summer after the leaves die back.

Leaves are in a basal rosette, each oblong with slightly dentate wavy edges and a prominent central vein. The minor leaf veins form a palmate network. The blade of the leaf gradually tapers into a winged stalk as it enters the ground.

The inflorescence is an umbel of stalked flowers atop the scape and held well above the leaves. There are small lanceolate shape bracts at the base of the inflorescence.

The flowers are upright at first, then eventually nodding. As they mature the corolla lobes turn backward and upward from the flower, resembling how artists depict a shooting star and giving the flower it's name. The corolla lobes (petals) can be pink, lilac, white and shades of all. The corolla tube inside is maroon and yellow, usually with a thick wavy deep maroon ring at the base. This is exposed when the petals reflex. The flower stamens form a cone with the anthers usually yellow. These surround the single pistil which rises from a 5-carpellate ovary. The calyx is green with 5 pointed lobes (the sepals) arranged alternate with the petals but much shorter than the petals. After flowering, the heads turn upward once again while the seeds are maturing.

Seed: Fertile flowers form a 5-valved capsule that is cylindric, with thick walls and whose length is less than 3x the diameter. At maturity it is a dark reddish-brown; the open tops of the capsule then resemble stars as the five valves turn outward. Each capsule contains numerous irregular shaped hard reddish-brown seeds that are scattered by the wind when the stem shakes unless small birds like Goldfinches get them first. Seeds require a short period (20+ days) of cold stratification, then light and cool soil for germination.

Habitat: Shooting Star will do well in sunny spots of the home garden where the soils are well drained - wet-mesic to dry-mesic. It grows from a fibrous root system below a small crown, but it is susceptible to crowding out by more vigorous taller species. Along with Field Pussytoes and Pasque Flower, Shooting Star is one of the first Upland plants to flower. Bees collect pollen and fertilize the plants which produce no nectar. While rare in the wild environment of Minnesota (see below), Dodecatheon meadia is readily available from nurseries and plant specialists that grow native plants.

Names: The genus Dodecatheon, a word meaning "of 12 gods", was originally used with the Primrose family and contains all the plants known as shooting stars. The genus is now considered to be a subgroup of the genus Primula, but with the Dodecatheon name retained. The species name meadia is an honorary named for Richard Mead an English physician (1673-1754) and is the only known use of this name. The honorary was given by the author for the plant classification, 'L.' which refers to Carl Linnaeus (1707-1778), Swedish botanist and the developer of the binomial nomenclature of modern taxonomy.

Comparisons: There are no confusing plants other than Dodecatheon amethystinum (Fassett) Fassett as explained below.

Above & Below: The flowers occur on a bare flowering stem called a scape. The corolla lobes (petals) can be pink, lilac, white and shades of all. As they mature the corolla lobes turn backward and upward from the flower, resembling how artists depict a shooting star

Below: Shooting star leaves are entirely a basal clump. Leaves have a prominent mid-rib vein. The leaf tapers to a wing on the stalk and the lower section of the blade and the stalk are frequently have a reddish coloration Leaves die back in mid-summer leaving only the dry stem. 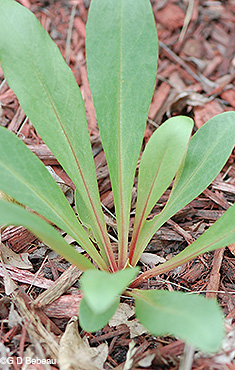 Below: The flower before the petals and sepals reflex and the flower head nods downward.

Below: 1st photo - At flower maturity the heads turn upward once again during seed production. 2nd photo - At full maturity the capsules are a dark reddish-brown and split open at the top into a star shape. 3rd photo - The root system is fibrous with a small crown. 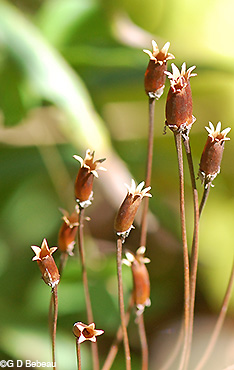 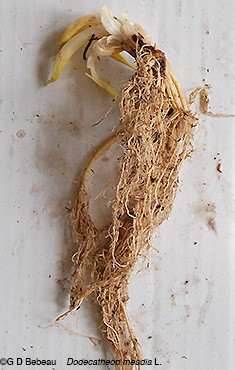 Below: 1st photo - Shooting Star seed capsule contain numerous irregular shaped hard reddish-brown seeds that are scattered by the wind when the stem shakes unless small birds like Goldfinches get them first. 2nd & 3rd photo - Shooting star is one of the first prairie plants to flower in the Eloise Butler Upland Garden. In 2014 the upland prairie was burned on April 22. By May 13 (2nd Photo) the plants had already put up a flowering stem and by May 21, one month after the burn (3rd photo) they were in flower. 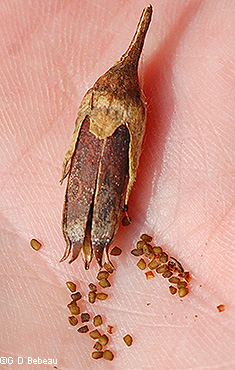 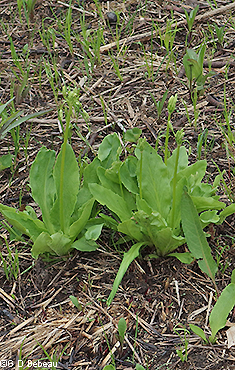 Below: A pink flowered version. Drawing by Britton, N.L., and A. Brown. 1913. An illustrated flora of the northern United States, Canada and the British Possessions. 3 vols. Charles Scribner's Sons, New York. 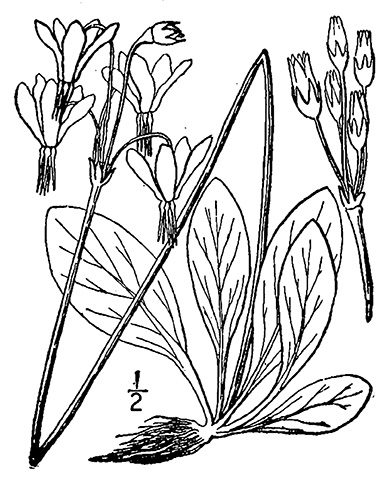 Notes: Eloise Butler's records show that she first introduced Shooting Star to the Garden on April 14, 1910 with three plants she obtained from Jewell's Nursery in Lake City, MN. She put in more on April 2, 1912, plants obtained from Gillett's Nursery in Southwick, MA. She also obtained plants of this species on Sept. 3, 1926 from Robbins' Nursery in Ashford, NC. Other plantings were in 1923, '24, and '28. Shooting Star was listed on Martha Crone's 1951 inventory of plants in the Garden at that time. She planted it also, in 1938, '39, '45 and '46.

Rare: Native populations of Dodecatheon meadia in Minnesota are known only in Mower County, so outside of protected areas like Eloise Butler, the plant is rare in the wild. It is listed on the Minnesota "endangered" list by The Department of Natural Resources. Per the DNR "A species is considered endangered if the species is threatened with extinction throughout all or a significant portion of its range within Minnesota." In North America its range is the eastern half of the U.S. except New England and is known in Canada only in Manitoba. It is also listed as endangered in Florida, Michigan and Pennsylvania. While rare in the wild environment of Minnesota, Dodecatheon meadia is readily available from nurseries and plant specialists that grow native plants. It will do well in sunny spots of the home garden where the soils are well drained.

Another species listed as more prevalent in Minnesota is Jeweled Shooting Star, aka, Dark-throat Shooting Star (Dodecatheon amethystinum (Fassett) Fassett). This is native to Minnesota in the SE section of the state. It has flowers that are deep rose-purple and rarely white. Some confusion will arise here as to species name, as some older books such as Gerald Ownbey's (Ref.#34) have specified the name Dodecatheon radicatum as being the name for Jeweled Shooting Star. The U of M's Checklist of the Vascular Flora of Minnesota (Ref. #28c) lists this as a misapplied name. Both the Vascular Plant Checklist and the DNR MN Plant Checklist (Ref. #28b) specify D. amethystinum as the correct species. Flora of North America (Ref. W7) considers the key difference between D. meadia and D. amethystinum is the seed capsule where the latter species is a lighter reddish to yellow, with thin walls and the length is more than 3x the diameter. Reports from the University of Minnesota on the characteristics of southern Minnesota populations of this species have raised issues as to whether the two species are really distinct and The Flora raises the same question. There are 17 species of Dodecatheon found in North America.