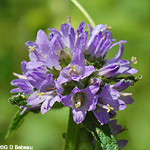 Bristly Bellflower is an erect short-lived introduced and invasive perennial plant of 1 to 2 feet height with a densely hairy stem.

The leaves are of two types - basal and stem. The larger basal leaves are of an oval to lanceolate shape, with tapered bases and long-stalked. The stem leaves are lance shaped, have hairy wavy edges and are without stalks (sessile). The margins have fine hair and the leaf underside is paler in color with long whitish hairs on the veins.

The inflorescence is a terminal cluster of 15 to 20 stalkless flowers. Clusters also appear at the upper leaf axils but may have fewer flowers. Flowers are surrounded by hairy green leafy bracts.

The flowers are 5-parted, bell shaped with a dark violet blue to purplish blue corolla with the 5 petals united near the base and the obtuse tips spreading outward forming the flange of the bell. The calyx is green, hairy, with 5 lobes that have pointed tips. There are five stamens with yellow anthers that are held toward the back of the corolla while the single style with its 3-parted stigma is exserted beyond the lobes of the corolla. Leaf-like small hairy bracts appear among the flowers in the cluster.

Seed: Fertile flowers produce a dry seed pod that contains several brown ovoid, but slightly flattened, seeds that have a slight ridge on the sides which helps with wind dispersion when the pod opens. Seed of the Campanulas usually requires at least 30 days of cold stratification plus light for germination.

Habitat: Bristly Bellflower is a plant of the north temperate zones of Eurasia. It grows in woodlands, dry grasslands and uplands where it is not too moist. It needs at least partial sun, but plants may become top heavy without full sun. It adapts to various soils but prefers calcareous. The root system is a fleshy taproot with associated stolons that spread and cause the plant to form colonies in the right conditions. It is considered invasive but not as invasive as the European Bellflower, C. rapunculoides.

Names: The genus name Campanula is derived from the Latin campana, meaning 'little bell'. The Campanula genus is home to many plants with bell shaped flowers. The author name of the plant classification, 'L.', refers to Carl Linnaeus (1707-1778), Swedish botanist and the developer of the binomial nomenclature of modern taxonomy.

Comparisons: A look-a-like species is Clustered Bellflower, C. glomerata. There the plant is much less hairy, and the leaves are broader (comparison photo below). The American Bellflower (Campanulastrum americanum) blooms in the Woodland Garden. This species is taller with light blue-violet petals that spread widely forming a star shape on a tall raceme, but not in clusters. In the Upland Garden will be found European Bellflower, C. rapunculoides, where the flowers are also spread out individually on a tall raceme. They have larger corollas and are partially nodding. Two smaller species have similar bell-shaped flowers but the plants have a much different structure with the flowers solitary or in in groups of 2 or 3: Harebell, C. rotundifolia, and Marsh Bellflower, C. aparinoides. See comparison photos below. 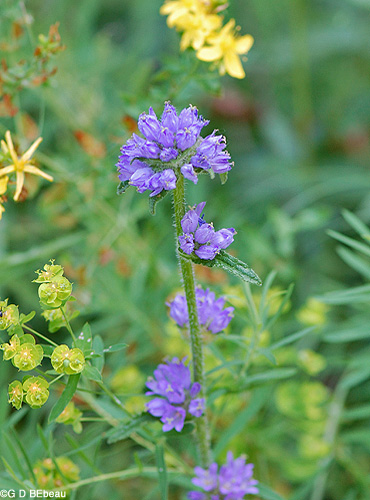 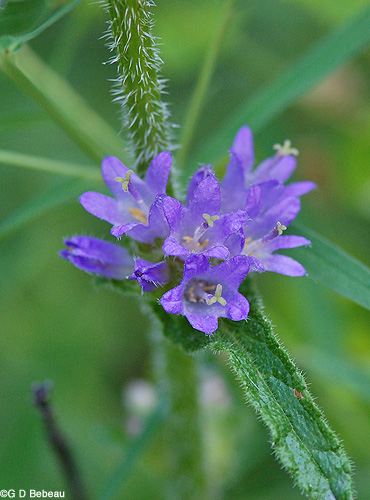 Above: 1st photo - A single specimen with Leafy Spurge and St. Johnswort in the background. 2nd photo - A smaller flower cluster springing from the leaf axil. Note how the stamens are deep in the corolla throat.

Below: 1st photo - The terminal inflorescence. All blooms from late June and early July. 2nd photo - Detail showing the hairy leafy bracts that appear among the flowers. Note the exserted style. 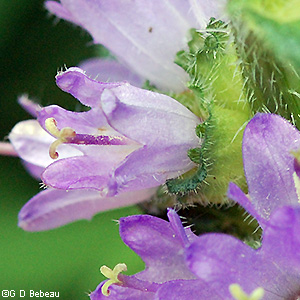 Below: Leaf examples: Note the hairy edges. In the 2nd photo note the developing inflorescence. 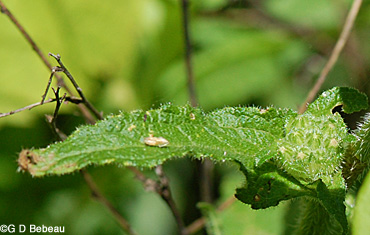 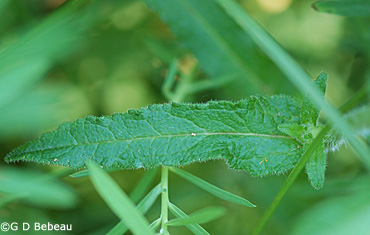 Below: 1st photo - Basal leaves have long stalks. 2nd photo - The underside of the leaf shows paler color and the hairy surface and leaf margin.

Below - Comparison: The inflorescence of Clustered Bellflower, Campanula glomerata. The stem, leaves and flower calyx are mostly lacking in hair. 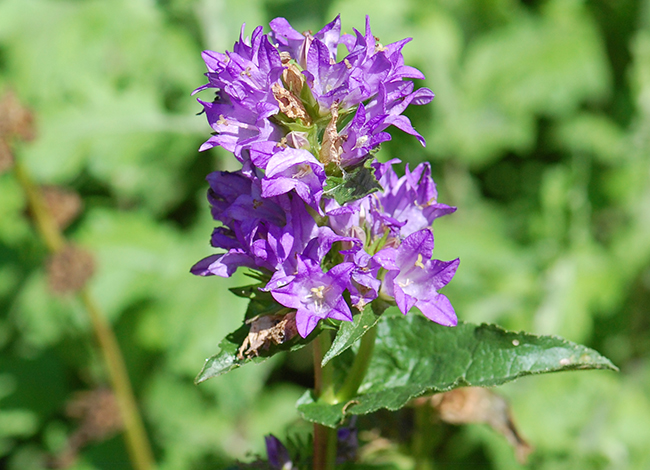 Below: A large clump of Bristly Bellflower in the Upland Garden. 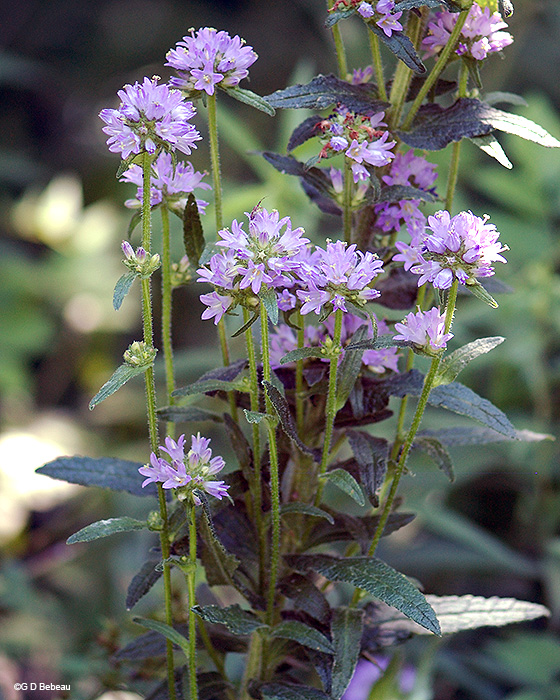 Below: A comparison of the five Bellflowers found in the Garden.

Notes: An unresolved issue is when Bristly Bellflower arrived in the Garden. Clustered Bellflower C. glomerata, was said to be introduced to the Garden on August 4, 1950 and again on Sept. 16 by Curator Martha Crone who added additional plants in 1953. Clustered Bellflower is also non-native, introduced from Europe, its only known habitat in Minnesota outside of gardens is in St. Louis County near Duluth where it has been collected at the former agricultural test plots. Martha Crone reported collecting plants that were growing along a road about 10 miles north of Duluth. The DNR surveys report that C. cervicaria is found in both Lake and St. Louis Counties in the Arrowhead region. Thus it is possible that Bristly Bellflower is the species she brought in, not C. glomerata, however, she listed the species as C. glomerata in her 1950 entry and just as "cluster bell flower" in the 1953 entry, which was also noted as "from Duluth." In North America Bristly Bellflower is found in the northern tier of states in the U.S., most of New England and in Canada in Manitoba, Ontario, Quebec and Nova Scotia.

David J., Schimpf of the University of Minnesota, Duluth, writing in Rhodora in 2005 states that there is widespread mis-identification of this plant west of the Great Lakes. Of herbarium sheets examined from this area that were labeled C. glomerata all but one were C. cervicaria.

There are five species of Campanula normally found in Minnesota, two of which are introduced: C. americana, Tall Bellflower; C. aparinoides, Marsh Bellflower; C. rotundifolia, Harebell; C. cervicaria, Bristly Bellflower; and C. rapunculoides, European Bellflower. The latter two are the introductions. All are, or formerly were, in the Garden.