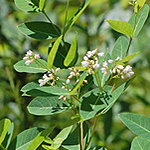 The Dogbanes are plants with a milky juice, short tubular or bell-shaped flowers with five lobes, widely branched at the top with the flowers in clusters.

Indian Hemp is a native erect perennial growing from 2 to 5 feet high. The main stem is branched toward the top with ascending branches; stems take on a purplish color with maturity and contain a milky juice as do the leaves. Dry stems in Autumn produce a tough fiber.

Leaves: The 2 to 4 inch long leaves are opposite, oblong to ovate with the lower ones rounded at the base and stalked. Tips taper to a point with the main vein sometimes extending to a sharp point. Margins are smooth as is the upper surface. The leaves turn a brilliant yellow in the fall.

The inflorescence is a branched cluster (a cyme) at the top of the stem with additional clusters rising from the upper leaf axils. There are short bracts at the base of the cluster.

The flowers are small with a white to greenish-white corolla (1/8 to 1/4 inch long) with 5 erect to slightly spreading lobes forming a tubular-bell shape. There is a tinge of pink inside the corolla. The green calyx is very short with 5 pointed lobes. There are 5 stamens with orange anthers that form a cone around the style. The nectaries are at the bottom of the corolla, total 5, and alternate with the stamens.

Seed: Fertile flowers produce pairs of seed pods that are very thin and long - up to 8 inches long, which, when split open (usually in the spring) release many brown narrow 3/8 inch long seeds, each with a tuft of long white hairs at the top, resembling Milkweed, for easy transport by air currents. Unlike Milkweed, the seed tips face the top of the pod.

The plant is toxic. See notes at bottom of the page.

Habitat: Indian Hemp grows from rhizomes and has a taproot, forming colonies from the spreading of the rhizomes, and also from seed production. Being a prairie plant it prefers full sun, loamy soil, wet-mesic to dry-mesic conditions. Indian hemp requires cutting of stems in the fall or burning to stimulate vigorous spring growth. The Upland Garden at Eloise Butler produces many more of these plants following a prairie burn. It also is more abundant in years with moist spring weather.

Name: Indian hemp is a member of the Dogbane family, a family well known even to the old Greeks. It was the Greek writer of the 1st century, Dioscorides, who provided the Greek name “apokynon” from which comes the generic name Apocynum, and means "away from dog" - referencing the plants toxic nature if eaten by dogs. The species name, cannabinum, means “of cannabis” or “of hemp”, referring to the woody outer fiber of the stem. It was for the use of these fibers that the common name of Indian hemp is derived. The author name for the plant classification - 'L.' is for Carl Linnaeus (1707-1778), Swedish botanist and the developer of the binomial nomenclature of modern taxonomy.

Comparisons: A plant with somewhat similar flowers and seed pods, but different growing habit is Spreading Dogbane, Apocynum androsaemifolium. Young sprouts can be confused with Common Milkweed (Asclepias syriaca) which is also toxic but less so than Prairie Dogbane. It comes up at the same time and also has milky sap. Milkweed stems however are green, less tough and usually hairy and milkweed is usually unbranched. The uninformed may confuse a young shoot with the edible Asparagus (Asparagus officinalis) but there again, the young shoot is more greenish.

Above: 1st & 2nd photos - The inflorescence is a branched cluster (a cyme) at the top of the stem with additional clusters rising from the upper leaf axils. The green calyx is very short. 3rd photo - Fall color with a pair of seed pods.

Below: 1st photo - The long seed pods appear in pairs. 2nd photo - The prior years seed pods splitting in the spring and releasing seeds. Note - seed tips face top of pod, opposite those of milkweed. 3rd photo - An individual seed, 3/8 inch long with many white hairs for wind dispersion. 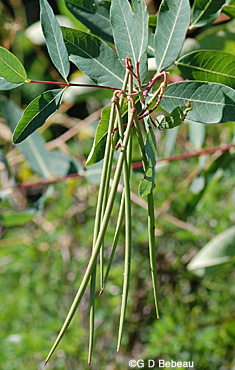 Below: 1st photo - The corolla has five erect spreading lobes forming a bell shape when viewed from the side. 2nd photo - The opposite leaves are rounded at the base with pointed tips with a projection point. Lower leaves may have stalks. 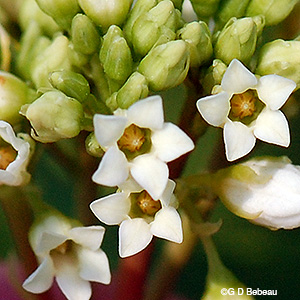 Below: Young shoots have a resemblance to those of Milkweed and Asparagus, but the young shoots of those plants are much more greenish.

Below: 1st photo - The dry stem has fine fibers that can be stripped off to produce fine threads, fishing line, etc. 2nd photo - Nez Perce people with Friendship Bags, originally made from Indian Hemp fiber- see details at page bottom.

Below: In the autumn, Indian Hemp can make a colorful field when the leaves turn a brilliant yellow: These photos from 1999 show a hillside in the Upland Garden in early October when the plant formed a mass of color. 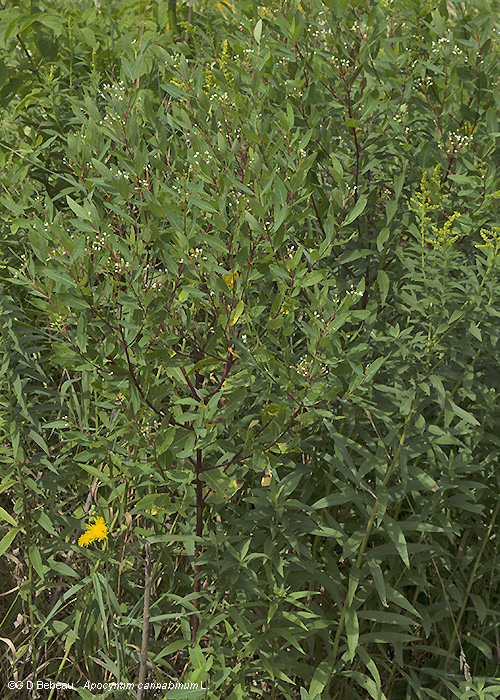 Below: Drawing of Indian Hemp from Britton, N.L., and A. Brown. 1913. An illustrated flora of the northern United States, Canada and the British Possessions. 3 vols. Charles Scribner's Sons, New York. 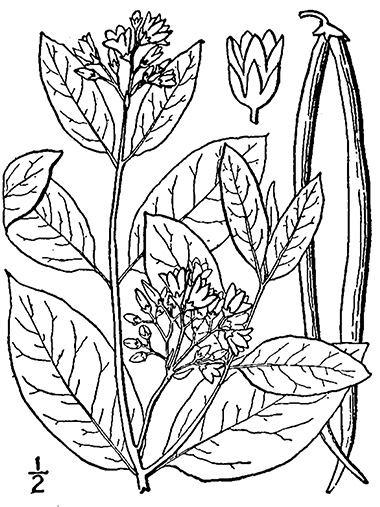 Notes: Eloise Butler introduced Indian Hemp to the Garden on April 24, 1913, with plants collected at Fort Snelling, near Minneapolis. She added plants from Brownie's Pond in Aug. 1915. ON July 3, 1917 she noted 'discovering' it in another section of the Garden. It's possible it was there all along or generated from the seeds of the plant she planted 4 years earlier. Additional plants were collected in 1919 from the Franklin St. Bridge area.

Indian Hemp is native to most counties in Minnesota except for a scattered few in south central and absent in the Arrowhead. This is one of the few plants that is native throughout the United States and all Canadian Provinces except the far north. Their are 4 species of Apocynum listed as native to Minnesota. A. cannabinum and A. androsaemifolium, Spreading Dogbane, are the most common. The other two have no current populations listed by the MN-DNR. These are A. sibiricum (which many sources list as a synonym for A. cannabinum) and A x floribundum, a hybrid known as Many-flowered Dogbane. At one time a number of varieties of the species were classified but those are not recognized today.

Toxicity: Plant material can be toxic if ingested without proper preparation. Plant chemicals are cardiac glycosides. They are also toxic to grazing animals.

Lore and Uses: Indian Hemp is one of those native plants with a lot of folk attribution for its medicinal values. When white settlers first arrived, they learned of this plant from the natives who boiled roots for a laxative tea (Blackfeet), dried the sap for a chewing gum (Kiowa) and other sundry uses from making sewing thread to a hair loss treatment! Once the white settlers got familiar, the plant became a remedy for dropsey and other things. Early, somewhat trained, local physicians found favor with the plant and employed it in general practice. Dr. John Lloyd (Ref. #22) recounted it’s history in his writings. This all led to its listing in the U. S. Pharmacopoeia from 1831 to 1916 and thereafter in the NF (National Formulary) until 1960 where it was regarded as a cardiac stimulant. As late as 1981, the plant was still used in Appalachia as a tonic for migraine, cold, pleurisy and constipation. Even so, the early users were aware that it was toxic in large doses. Roots were recommended to be gathered in the fall.

Chemical analysis reveals that the toxicity and major medicinal component comes from the constituents “cymarin” and “apocannoside" (apocynamarin). Both are cardiac glycosides, toxic normally, but in controlled doses have been shown to have anti tumor activity on human carcinomas (cancers). Constituents of the plant have specific effects on the heart as the chemicals in A. cannabinum are considered some of the most powerful cardiac stimulants of North American plants. Large doses can be a deadly and only an expert should attempt to use the material. Cymarin is also toxic to grazing animals but they find it distasteful and avoid it. Here then we have a plant with chemical makeup that actually does have effects on the human body - good and bad.

A practical use: It is well established that Native Americans used the woody fibers of Indian Hemp for everything from baskets to fishing lines to sewing thread, hence the common name of 'Indian Hemp', but until recently another use was almost forgotten. Every Plains Indian woman, young or old, had to have a corn husk bag, sometimes referred to as friendship bags or "wapanii sapk'ukt" (twined bag). Early surviving examples have provenance dating back to the 1830s. “Corn Husk” is a later term as the Indians who made them did not have easy access to corn in those early years as they did later when they actually used corn husks to weave the bag (and then yarn even later). It has been discovered by Joice Overton, an expert on the Ne-Me-Poo (Nez Perce) that while the style of making the bags has not changed, the materials have. The early material that was used was readily available to the plains and western Indians - Apocynum cannabinum - Indian hemp! Today, special ceremonial bags are still made with Indian hemp.

This is not a garden plant as it can be invasive with moist conditions as anyone observing local populations, including those at Eloise Butler, can attest. The flowers are attractive to bees and butterflies. The large root system does provide erosion control.

Harvest: Indian hemp is harvested in the fall when the stems are cut, split open and the long, silky fibers removed. After the winter, the fibers have disintegrated and are not useful. Cutting in the fall seems to stimulate better spring growth, Also, burning off the old stems also stimulated better growth. Burning causes newer growth to have straighter stems, taller, and with more fiber. It takes many plants to gather enough fiber to produce the cordage needed to make something like a Sierra feather skirt. Each foot of cordage requires about five stalks, and the skirt uses 100 feet of cordage. A 1933 study on the making of a deer net found that it required 7000 feet of cordage - which required 35,000 stalks.