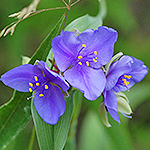 The leaves are flat, smooth and with a sheath surrounding the stem. Leaves alternate in a spiral fashion on the stem. Larger leaves are usually less that 1/2 inch wide but linear, flat, and very long. Edges and surfaces are smooth and the long leaf bends downward beyond the middle. Sometimes there can be fine cottony hair on the leaf edges just above the sheath.

The inflorescence is a terminal cluster of short-stalked flowers (a cyme), sometimes more than 20 flowers, with 2 long leaf-like bracts below the cluster.

The flowers are 3-parted, each about 1 inch wide with ovate petals that have rounded tips and that vary from blue to pink and sometimes white, but blue is the usual in this species. The 3 sepals of the calyx are green, mostly smooth, except for some marginal hair, and shorter than the petals. Flower stalks are smooth. The six stamens have blue filaments, yellow anthers and multicellular hairs at their base. (Filaments and hair match the color of the petals.) There is a single style with a knob-like stigma. The ovary has 3 united carpels. Usually only two flowers of the cluster open at once and these close by noon on sunny days.

Seed: Fertile flowers produce a round papery 3-part (3-valved) seed capsule 4 to 6 mm in size with each capsule valve having two seeds. The seeds are tiny, elliptic in shape, dark brown to black, flattened on one side, 2 to 3 mm long, with a rough oddly patterned indented surface. Seeds require 120 days of cold stratification and cool soil for germination. Best to plant in the fall and let nature do the work.

Habitat: Bluejacket grows best in full to partial sun, in sandy to loamy soils, wet-mesic to dry moisture conditions. It grows from a fleshy rhizomatous root system which may produce offsets but re-seeding is the most common form of spreading. Of the three Minnesota species of Tradescantia, this is the only one that will grow well in less dry conditions and less than full sun.

Names: The genus name, Tradescantia, is an honorary for John Tradescant (1608-1662), English gardener to the King; the species name ohiensis, meaning 'of' or 'from Ohio'. The author name for the plant classification, of 1814, ‘Raf.’ is for Constantine Samuel Rafinesque, (1783-1840), European polymath who traveled in the United States, lived here many years, collected specimens, and published over 6,700 binomial names for plants. He applied to be botanist on the Lewis & Clark expedition but Jefferson turned him down in favor of training Lewis to act as botanist and saving the expense of another person. In Eloise Butler's day the plant was classified as Tradescantia reflexa.

Comparisons: A close match to T. ohiensis is the Bracted Spiderwort, T. bracteata. That plant is shorter by half, rarely branched, usually has rose flowers and the calyx and flower stalks are denesly hairy. HOWEVER, if grown close by, the two species will hybridize. The other species found in Minnesota, Western Spiderwort, T. occidentalis, has branched stems but also with hairless stem nodes and leaves. Sepal hairs are mostly glandular but not dense hair like T. bracteata. 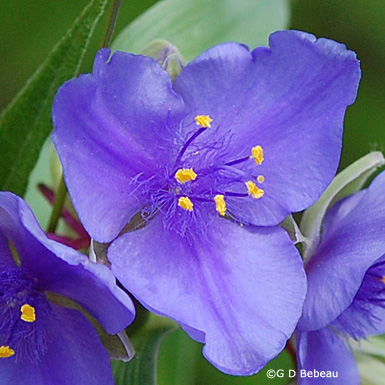 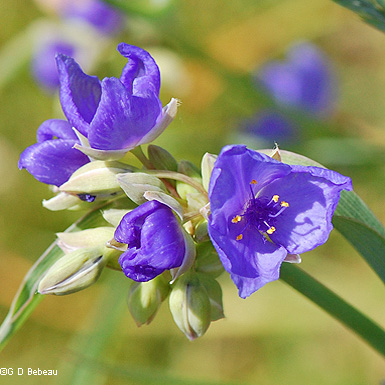 Above: The filaments of the stamens and the fine hair at their base match the color of the petals. Usually only 2 of the flower buds are open at one time. Flower stalks are smooth. 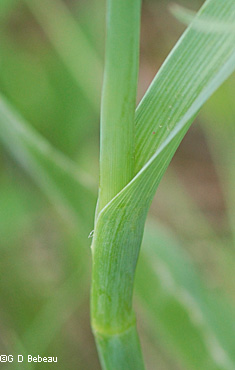 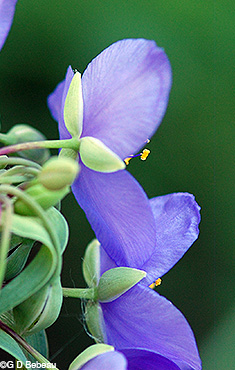 Below: 1st photo - Seed - At the center is the round papery 3-part seed capsule. 2nd photo - The individual seeds are small and elliptical with a oddly patterned surface. 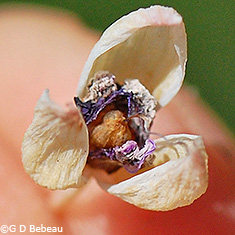 Below: The root system is fleshy rhizomatous. 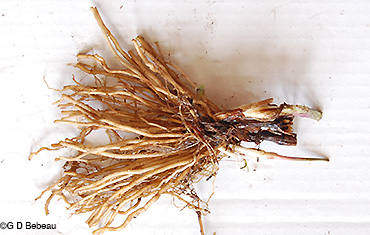 Below: The two conspicuous leafy bracts are visible in each flower cluster. 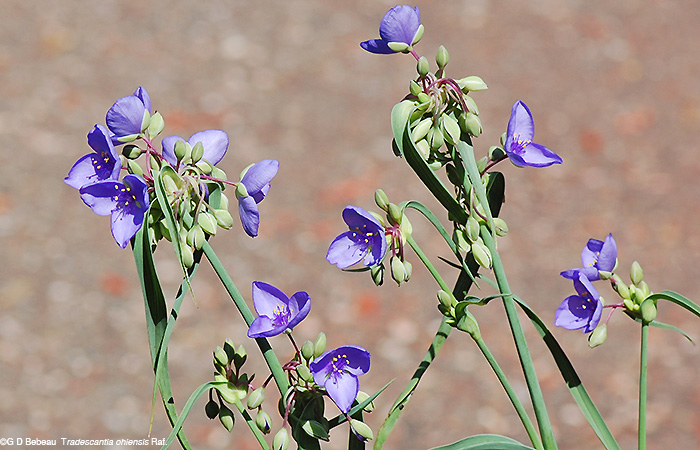 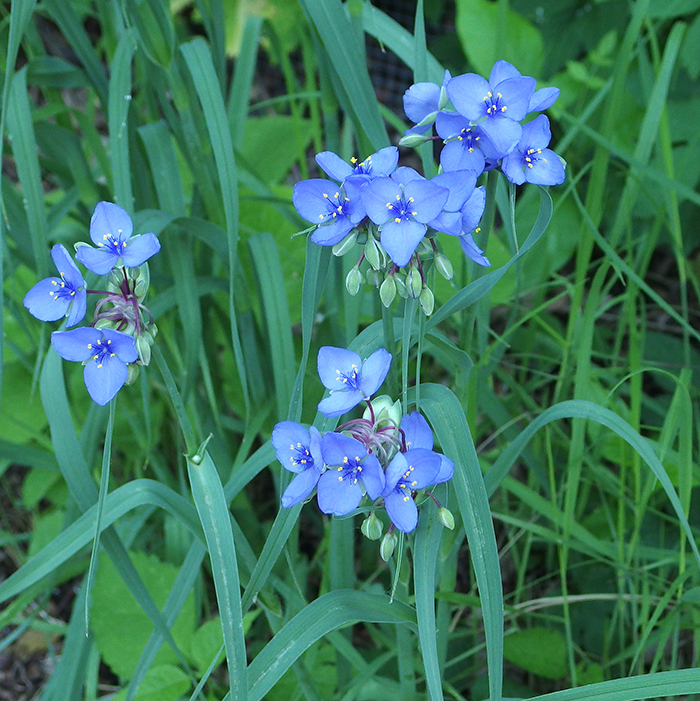 Notes: Bluejacket is not native to the Garden area but is native to the four counties in the very SE Tip of Minnesota. It is quite prevalent in Wisconsin. It is uncertain when Eloise Butler first added it to the Garden but on May 29th, 1915 she noted it in bloom and on June 4, 1915 she planted 25 plants from a source at Sandy Lake (which may be the one in Wisconsin east of Lacrosse). In July 1920 she got 9 plants from Columbia Heights, using the older name Tradescantia reflexa. More plants in 1924 and '25. Martha Crone planted it in 1934 and in June 1945, but did not note it on her 1951 Garden census. It has been recently added back to the Garden.

Bluejacket's range is the eastern half of the United States and curiously while named for Ohio, it is now considered endangered there. T. ohiensis is the most widespread species of the genus in the U.S. In Canada it is known only in Ontario. T. ohiensis is one of three species of Tradescantia found in Minnesota, the other two being more widely found are Western Spiderwort, T. occidentalis, and T. bracteata, the Bracted Spiderwort (which is also in the Garden).

Eloise Butler wrote of the Bracted Spiderwort, T. bracteata, but the information except for the color applies here also: "This plant is closely allied to the lilies. The flower is on the plan of three - having three green sepals, three bright reddish or bluish purple petals, six stamens and a pistil usually made up of three united carpels. The stamens are a distinctive feature of the flower, with their yellow pollen sacs against the purple petals. The stalks of the stamens are densely fringed with purple hairs, whose beauty has a depth “that is deeper still” under the armed eye of the microscope. The hairs, when magnified, are seen as branching chains of exquisitely tinted spherical and cylindric, bead-like cells, within which pulsate circling streams of protoplasm - the living substance - endowed with the same properties in the humblest and in the highest forms of life." Published June 11, 1911 Minneapolis Sunday Tribune. (Read)